I went to a dog show on Saturday. It was organised by the rescue centre who looked after me before I arrived at my forever home. My humans thought it would be a good idea to try and get me more socialised around other dogs, as I tend to be quite exuberant and excitable sometimes when I first meet other dogs, or a situation is quite new to me.

So off we went to the dog show to try and continue my education and see if I can be calm around other dogs and people. It was a very warm day, which helped as I am slower in the heat, and don’t tend to pull as much on the harness. I enjoy car rides, despite my early encounter with a car when I was a pup. Seeing somewhere new, especially if there are hedgerows involved is always exciting for a Beagle Harrier. We arrived after it had started, which was probably the plan knowing these two humans I adopted. There were two main show rings, and plenty of other stalls with food, drink and toys to buy. It looked great fun. The first time we went around the stalls and spoke to people, I was very excited and wanted to woof with as many dogs as I could. You should understand that I hadn’t been socialised when I was a pup, so I missed out on my very important formative years. Because I can be over-exuberant some dogs take umbrage with me. I am getting better though, I approach with my tail wagging and I am always smiley. Anyway, we strolled around and I was having a great time. We watched the judging for one of the classes. I managed to sit still for all of three seconds.

It was interesting as I met many different breeds and types of dog, most of whom were rescue. My humans were speaking to others who had also taken on rescues and I think it was reinforcing their view that we are worth it, we are hard work sometimes but the rewards are there for all to see in the end.

So, having wandered around and chatted to dogs and humans, I got some presents for later when I got home. The packets smelled of food but they were put away from my sight. I wasn’t entered into any classes as I thought it better to allow other dogs to win “Loudest Aroooo” or “Dog that can’t sit still for more than three seconds”.

I was calming down after 15-20 minutes, I even managed to lay down on the grass. It was very warm and there were plenty of water bowls. Eventually we found some shade, fortunately near to a hedgerow and I was allowed to sniff about. 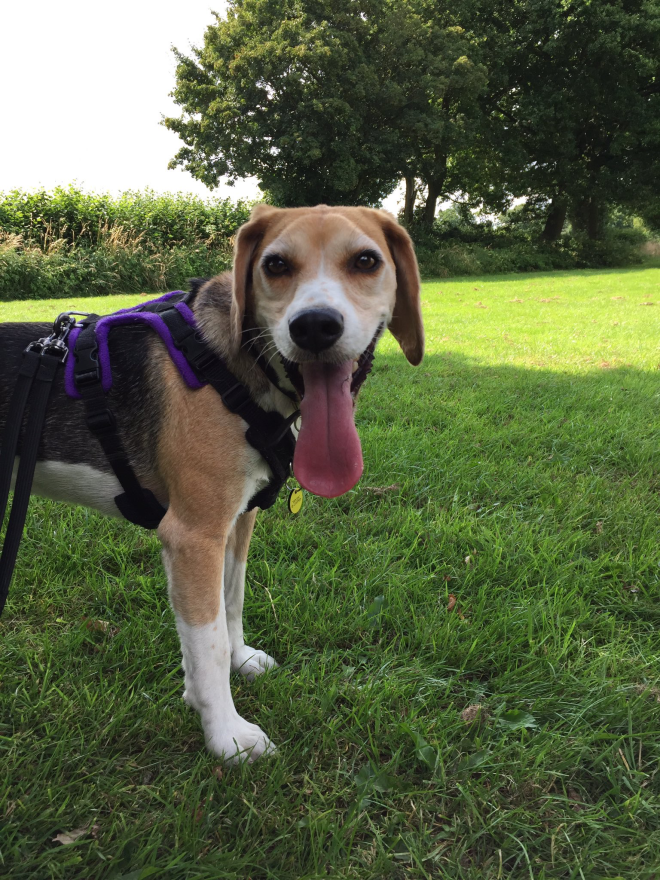 It was a good learning experience for me. I have improved so much since I arrived that, as I woofed in my last blog, I am apparently a different dog. It has taken some time to realise that I have to be gentler around other dogs. I can play, but I have to be a little more careful and see the signs if some dogs don’t like my bounciness.

Thank you to Chilterns Dog Rescue Society for organising the day, it was great and I enjoyed myself. I’m learning new things every day. This was an important step for me.

Enjoying life in my forever home. Sharing my contentment with whoever will read my tales. I live in Buckinghamshire, UK. View all posts by rescuedogdexter