Apparently I am a different dog? I’m not sure what they mean, as I look the same as the day I turned up, albeit slightly greyer around the whiskers. That’s called being distinguished I have heard it said.

When I arrived in late December 2013 I was a frightened, confused and bemused Beagle Harrier. Having been rehomed twice I wasn’t really certain if this latest house was to be my forever home. The humans looked quite nice, the house was more than adequate and the garden was like some magical playground which I wanted to explore immediately. However I had seen this before and for one reason or another, it hadn’t worked out. I was confused, I wanted to feel settled, to feel part of a family I suppose, but I didn’t have the mental stimulus or ability to know exactly what that entailed.

This was me, a couple of days after I arrived. The green fluff is all that remained of a toy I had “cuddled” with my teeth. 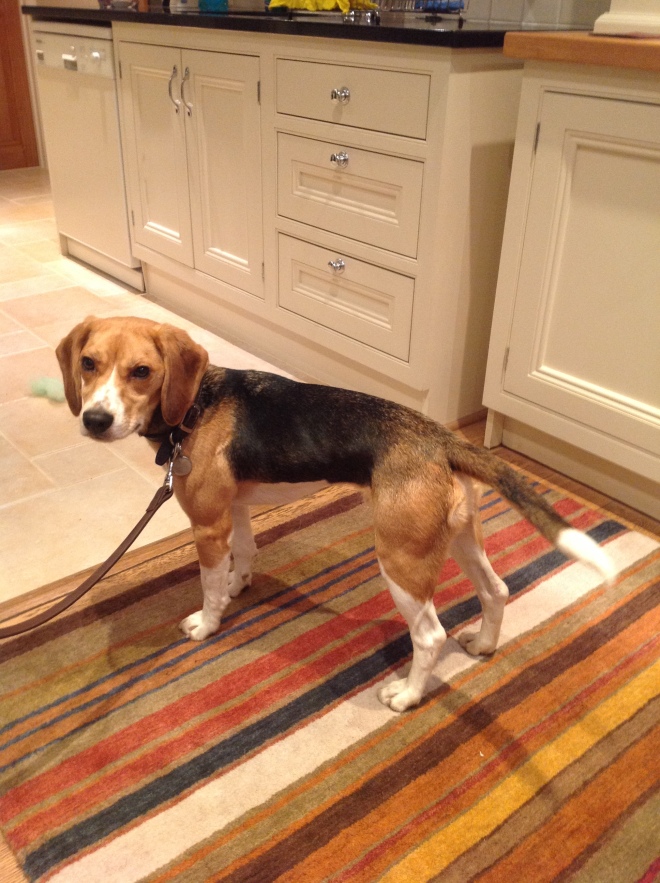 I had no stability or regimentation to my life. I was looked after very well by my friends at Chilterns Dog Rescue Society and I had some basic training and command structure. But there was no routine to my day. I woke up, strolled about my kennel, ate my breakfast and then had a whizz around the fenced in play area. I strolled back to my kennel and lazed about in there until it was time for snoozing again. There were plenty of other dogs to play with but I was missing something. I was feeling lonely, I didn’t feel part of a pack, I didn’t have humans to look after. When these humans arrived to see me for the first time, they were told I was beginning to lose my “aroooo” as I was becoming quieter and somewhat more withdrawn. It was a fortnight after we first met, that they returned to pick me up and take me to, what I desperately hoped, was to be my forever home.

It was a struggle for quite some time for us all. We didn’t understand what we wanted of each other, and I could see that they were getting frustrated at the communication between us. I was taken on walks, went to the park, went to the woods, through some fields, even walked through the town centre. Pigeons are great to chase! I saw new places, smelt new scents and met different people and dogs. But there was still this nagging doubt in my mind, was this my home. Without realising it however days turned into weeks, then into months and on to two and a half years currently. Gradually I was getting a routine, I was walked around a certain time, I had breakfast at approximately the same time, I had to find my treats around the house around the same time each day. I was allowed to snooze, I could wander about the garden and sniff the scents whether it was rain, sunshine or snow. The walks  changed areas slightly as we tended to go to the woods or fields where I could let off some steam and be satisfied, both in mind and body. I was enjoying this much more as the days, weeks and months passed by. I was being trusted in the garden, not to run away, not to try and jump over the fence and not to dig holes. I managed two out of three, the hole digging remains particularly appealing. I was finally getting my routine, I knew what was coming. Gradual, subtle changes were taking place, so subtle that sometimes it took other people to point out what we didn’t realise. I am a happy dog, I am content and I have routine. I’ve got what I have been missing for a large part of my life.

This photograph was taken on Sunday 17th July 2016. Even I can see a change.