Panic over everyone, I think I’m here to stay. Its appears that I have managed to convince the pawrents that I am a good boy.

When I first came into the house, I really didn’t know if I was staying or if it was another temporary stay. I wanted some significant degree of stability, routine and guidance. I had missed out on a large amount of these three staples of puppy hood and I was skittish, directionless and preferred the sound of my own bark rather than listen to my pawrents. Gradually, over 18 months or so, I worked out that they only wanted me to have the best that they could offer. The best love, the best home, the best training and the best all round help that I needed to put me on the straight and narrow. Many things have changed and mostly for the better as far as I concerned. They would worry about taking me out in public as I would bay, pull and generally be unruly.

We went on holiday to the Lake District in Cumbria and on the first night after travelling we we went to the pub, and they were filled with fear and trepidation. I fell asleep on my settle mat, pretty much next to the bar. Upon the first full day there we went on an 11 mile walk. Upon arriving in the pub they were again fearful of my likely shenanigans. However I slept like a baby once more. This continued at some pace. I went to the pub or I would go to the local town for a stroll and I was getting better at being good. We went away for a few days here and there, and my behaviour got better and better. I was starting to listen to my humans a bit more, and I didn’t really realise I was doing it. We were actually getting more in tune with each other. My old life of worry, uncertainty about my fate and my fears over where I was going to be homed next all receded.

At home I was coming when called, I would sleep and snooze and be more relaxed and I wasn’t waking up every time someone left or entered a room. Then I surprised them both about 2 days ago. I was in the garden and saw a tiny blackbird chick on the patio. I barked and barked at my pawrents to let them know to do something. I would have played with the little feathered chap earlier in my life, but I just alerted them to the bird. They had proud ears for me because I did the right thing. I probably scared the bird rigid but I didn’t touch. 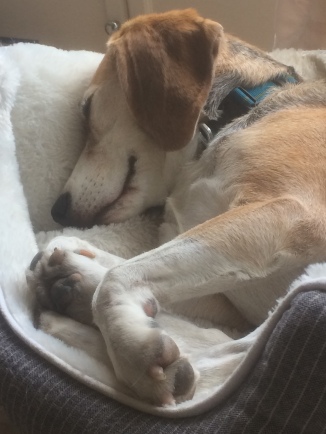 My life is different, it has changed for the better. And I do not intend to look back. I’m staying.

4 thoughts on “I think I’m staying”