Skip to content
Join 244 other subscribers
Yesterday was exhausting, even for a fit and healthy Beagle Harrier like me. I let M&D sleep in a bit. It had rained overnight so everything was a bit more slippery when I went out with M for a quick walk in the morning. The clouds were still on top of the Fells and the sun hadn’t quite burned back the misty dew. It was still lovely. We couldn’t get to down next to Goldrill Beck as the rain from the previous night had raised the water level. We strolled about to stretch our legs, only to return to the cottage briefly. We weren’t back long before I swapped over my humans and went out with D whilst M relaxed in the cottage. We strolled a bit further than I had done for the morning walk and I could still feel the effects of my exertions from yesterday in my paws. It was nice to be out and about, and I even met some other furs. Everyone is so nice here, all the humans say hello and the furs have a friendly air about them.

On  our walk, we saw they were setting up the cricket pitch so I made sure me and D had a wander around before heading off up a road we had never been on before. This wasn’t  surprising that I hadn’t been on this road, as I’ve only been here 1.5 days. I wanted to look over every drystone wall, climb every bank, look through every gate and smell every hedge possible. We wandered for ab couple of miles and then D thought we should return to see what M was up to.  When she found out where we had been, she said we should go back and see what it’s like further along the path as it sounded so good. So off we strolled, me in the lead as usual, showing my humans the way. I was so happy to see all the hills and rivers, and smell all the lovely smells, that we were off the tarmac and onto the rocky path before I knew it and going toward somewhere called Grisedale Tarn. A tarn is a small lake in the big Lakes.

On our way we passed plenty of sheep, some cows and lots of people coming in the opposite direction. The people all seemed really nice again, and everyone commented on how handsome I was. Who am I to disagree. We went on for quite some time and the path was climbing closer to the misty clouds. This was another adventure, and it was great. I drank out of most of the becks on the way up and walked through most of the muddiest and boggiest parts of the path, after all I wanted to make sure I enjoyed the Lakeland experience as much as possible.  It started to get a bit steep and rocky so we decided that we would cross a bigger river and then descend on another path. I was leading the way as usual, my intrepidness coming to the fore.

We came back down and strolled back past the sheep and cows again. I wasn’t allowed to say hello to them as they kept on running away. I was kept on a very tight lead by M, which was clearly for the best as the farmers are very strict on their livestock being hassled by naughty furs.
When we got back to Patterdale, I was allowed in the small post office and supermarket. The lady who owned the shop was really nice and gave me a biscuit. M&D were a bit worried as I had really dirty paws, but the lady in the shop just smiled and said I was handsome. The biscuit was very nommy too.
I was tired but I made sure I had enough energy for a short stroll to the pub, the White Lion. I had been in there briefly the night before and M&D were pleasantly surprised that I behaved impeccably and just went to sleep on my settle mat. There were a number of other dogs in there, and they all told me it was a nice pub with some dog biscuits behind the bar. 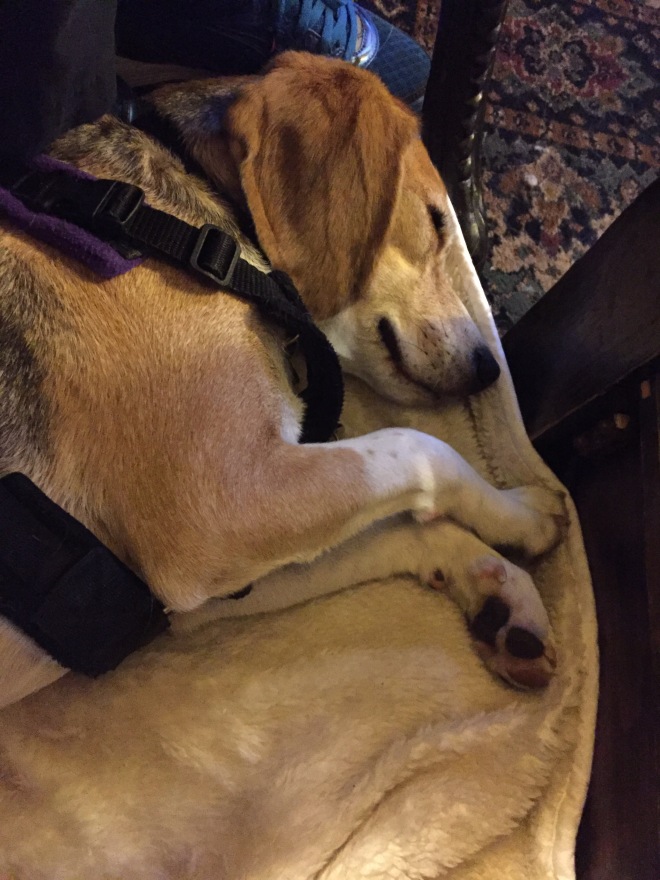 This place is great but it makes me feel sleepy with all the walking, climbing, splashing about in muddy puddles and general Beagling I have to do. What would tomorrow hold, I would sleep on that thought.